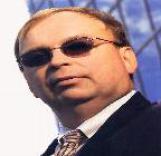 Gregory “Greg” Partyka is recognized as a visionary, innovator, and strategist with sound analytical skills, who is able to quickly adapt to changing business environments. A problem solver, he has an uncommon of balance of technical and business expertise across many industry verticals. He is your “trusted adviser”.

Greg began his professional career at Hartford Life in 1981 as an actuarial programmer. In 1987, Greg was selected to join the core team which introduced Oracle technology into The Hartford. Greg played various roles on the project, including Senior Developer, DBA, and Integrator. Greg received numerous accolades, including a speaking engagement at the Oracle International User’s Group, and membership in the Oracle 7 Alliance. Greg also designed, and implemented the company’s initial Group Benefits web portals; EmployerView, and ProducerView.

In 2000, Greg joined CGU Life as Director of Technology. In this role, he was responsible for the development and implementation of the Technology Architecture and Strategy for the company. In 2001, he was elected Assistant Vice President and assumed the role of Chief Technology Officer. The divestiture of the CGU Property Causality organization and the re-branding of CGU Life into Aviva Life Insurance Company created a fifty-year-old startup company, and several major technology investments. Greg led the infrastructure initiatives; establishment of a “Lights Out” Data Center Operational environment, establishment of the IT Service Desk, Disaster Recovery, Capacity Planning, Change Management, Release Management, Anti-Virus, and Desktop Refreshment Strategies.

Upon leaving Aviva, Greg joined Oracle Corporation, first as an Enterprise Architect, and then as a Consulting Insight Program Director. Greg facilitated client based workshops utilizing the Oracle Insight methodology, which aligned customer business problems and requirements to industry best practices across people, process and technology. During his tenure, he participated in over forty workshops in both the private and public sectors across many industry verticals.

In 2010, Greg formed Bare Cove Technologies LLC. The philosophy of the company is simple. Organizations, both large and small, are spending their human capital dollars improperly. Information Technology resources should be creating competitive advantage through innovation. Greg advises his clients on strategies to “Foster Innovation”.

Greg has appeared as a speaker at numerous industry events. He has been quoted in the various publications including Computer World, Insurance & Technology, and Finance Tech. He was named by Oracle magazine as “2005 Middleware Architect of the Year”.

A 1980 graduate of Holy Cross College in Worcester, MA, Greg holds a bachelors degree in Chemistry with an emphasis in Pre Medical studies. Greg currently lives in the seaside community of Hingham, MA with his wife Maureen and their three children. Greg enjoys golf, candlepin bowling, and coaching basketball.